I wear some unusual garments as a rabbi:

Never though, have I felt as self-conscious about my dress as this past Friday, when I went to pray “Jumma” with a scarf wrapped around my head, in my novice attempt to fashion a hijab.

Wearing a long, “modest” skirt, seated on the floor, with my hair and part of my face covered – I felt anonymous in a room full of Muslim women worshippers. There was no way for the dozens of sisters to know that I was a rabbi – which was fine by me! I was perfectly happy to hide my face in a Koran, and watch Sheikh Mostafa’s fiery sermon televised from the second floor up to the women’s section on the fourth floor. My cover was only blown when the Imam thanked not only RabBi JereME, but also RabBi YaEl, and my cheeks turned crimson.

Seated on the floor of the mosque, amongst a crowd of women from all corners of the world, each wrapped in a multicolored hijab, I was reminded that sometimes you must do things that make you very uncomfortable – physically, emotionally and spiritually – in order to extend yourself to others, and grow as a human being.

Two weekends ago, as tens of thousands of people showed up on Saturday night to protest at airports across the United States, I was stuck at home with two little kids under five. I felt like there was little I could do at that moment, and yet, I wanted to dosomething. I was inspired the next day by a trip to the Jewish Museum with friends from my daughter’s secular preschool, whose parents are first generation immigrants from China and Poland. As we spent the morning together, it was crystal clear that we have many of the same struggles: How do we get our six month old babies to sleep through the night? How do we navigate the New York City kindergarten search process? What’s the most efficient way to travel from the Upper East Side back to the Upper West Side at lunch time, when hungry tummies are grumbling?

In my quest to “do something,” I started with a simple Facebook post, asking my friends: “In how many languages can you say: ‘My house is your house, My city is your city, My country is your country.’” From that post, I gathered over a dozen languages from friends from all over the world, and then turned this collection into a banner co-created by the amazing students of the Ansche Chesed Hebrew School. Our kids, ages four through fourteen – our beacons of hope and empathy – helped cut and paste the sayings, decorated the banner, signed their names, and added creative elements, such as “We stick together stronger than hot glue!” Brothers and sisters signed their names next to each other, and asked if they could sign for their younger siblings, who are not yet old enough to join our learning community. 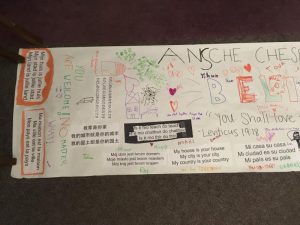 When I unraveled the banner from two directions, the students commented: “It looks like the Torah!” How profound. Indeed, a work of art created by a diverse community of students, and at its center the idea that “You Shall Love Your Neighbor Like Yourself” is indeed a Torah that I am proud to live by, and share with our neighbors.

As Rabbi Kalmanofsky and I presented this work of art, this Torah-like banner, to our Muslim brothers and sisters at Jumma last Friday – it was so clear that when you extend your love to others, they want to love you back. We were applauded and photographed. We were hugged and kissed. It was clear that when we share our Torah, we bring it to life by acting in its ways and enacting its mitzvot. 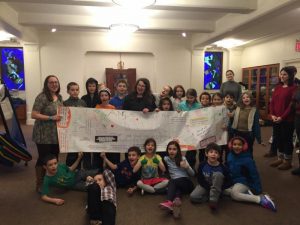