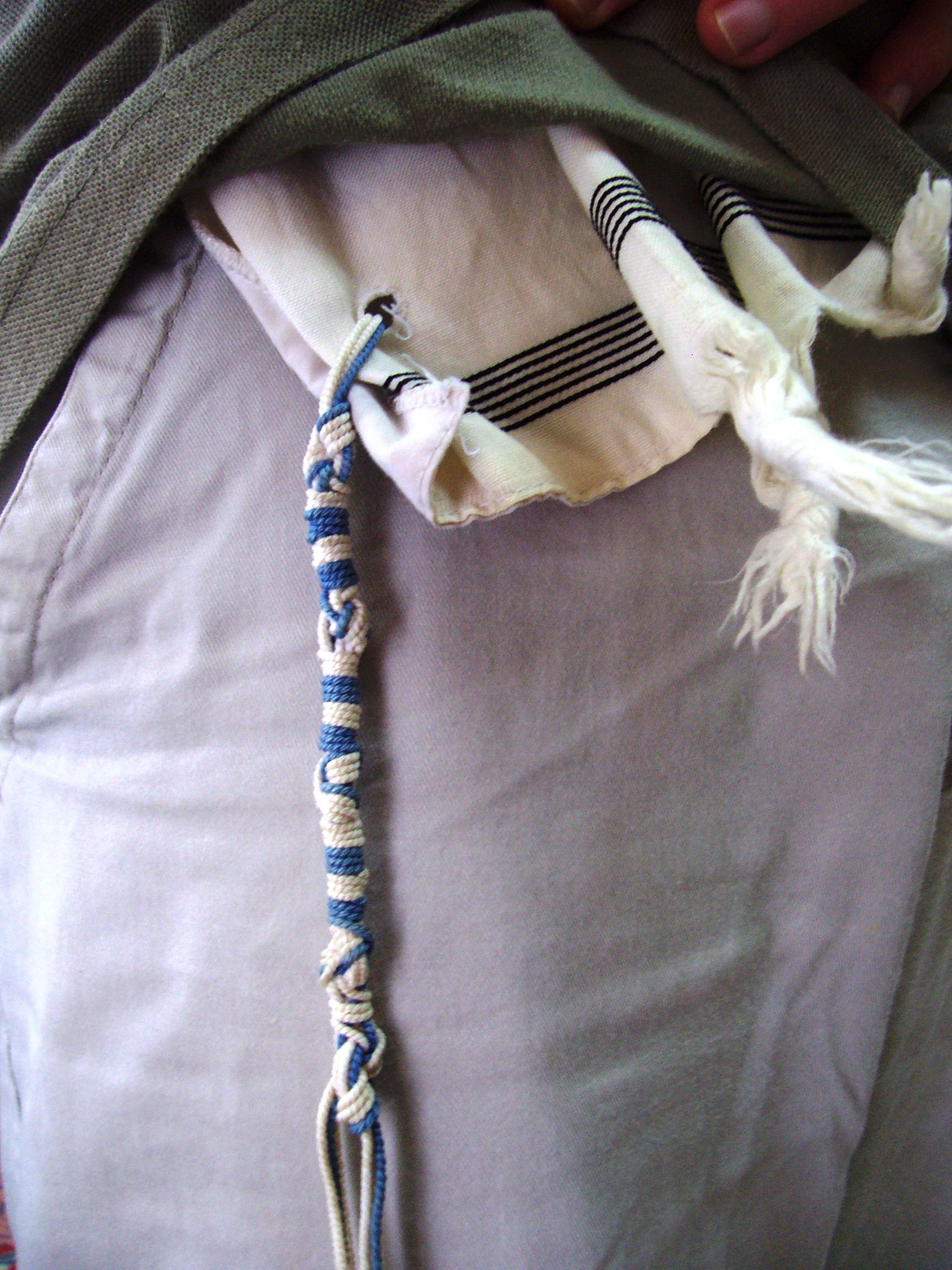 The third section of Shema [Numbers 15.37-41] commands Jews to attach fringes to our four-cornered garments, to remember the Exodus. Ancient Israelites did this on their regular clothes, which must have been something like capes or ponchos. As styles changed, the mitzvah of tzitzit came to apply to ritual garments, either the outer shawl or טלית/talit we wear during services or the symbolic undergarment many observant Jews wear.

The Torah describes the fringes only generally, but the baseline action is simple: ועשו להם ציצית/v’asu lahem tzitzit, “make fringes on the corners of your garments for all generations,” ונתנו על ציצית הכנף פתיל תכלת/v’natnu al tzitzit hak’naf p’til tekhelet, “place on the corner fringe a thread of tekhelet.”

It’s hard to identify the hue of tekhelet. Color words today are more precise than in ancient Hebrew, in which green entailed yellow and red covered brown, too. The medieval Torah commentator, Rashi [1040-1105] defines tekhelet as ירוק/yarok – which we would call green. But based on classical midrash and Greek and Latin translations of the Torah, the tekhelet was some sort of deep blue, purple or violet [there is evidence for each position]. But we cannot know for sure, since the practice fell out of use during the early middle ages, probably because the special dyed threads were too expensive for most people. Since then, Jews have had only white threads on their fringes, but no blue.

In the 20th century, in a remarkable combination of modern chemistry, archaeology and creative Talmudic scholarship, authorities reconstructed how tekhelet may have been produced. Today a dye works in Israel uses the blood of the snail murex trunculus to produce a royal blue. We cannot be certain this is the very same tekhelet our ancestors wore 2,000 years ago, but wide swaths of observant Jewry accepts it. Halakhically, if you wear this tekhelet, you are fulfilling the biblical commandment in the most optimal way. Using only white threads is, today, acceptable but sub-optimal. Admittedly, the new tekhelet is expensive, so not everyone will want to run out and order it. The style that I recommend (according to the 12th century Provencal R. Abraham b. David, or Raavad) costs $45 for a set of 4 blue and 12 white strings.

I find wearing tekhelet spiritually uplifting, enhancing my davvening, especially of this third paragraph of Shema. A grammatical oddity in Numbers 15 yields a meditative midrash. The Torah tells us to “place on the corner fringe a thread of tekhelet, and it will become your fringe, and you will see it, וראיתם אותו/u’reitem oto and remember all God’s commandments.” The problem is that the words fringe and blue are feminine, while the direct object used here אותו, is masculine. (OK, there is a simple grammatical explanation that resolves the discrepancy without midrash, but work with me here.) Rabbi Shimon ben Yochai said that one who gazes upon the blue fringe will see – not it – but Him, with a capital H. Gazing upon this blue thread somehow provokes a divine rapture [Talmud Menahot 43b].

Why should this mitzvah out of all the 613 disclose a visionary experience? The Talmud there continues: “Rabbi Meir would say: what is so special about the color tekhelet? Tekhelet resembles the sea, the sea resembles the sky, the sky resembles [some versions add: the sapphire (or lapis lazuli), and the sapphire resembles] the Throne of Glory.” This Midrash tries to capture a sense of reverence and reverie that might strike a person wearing the special blue thread. The sea is overwhelming, dwarfing your small human life. Yet your clothing bears a trace of the ocean. The sky even vaster, encircling our little globe and stretching into distant space. Your tallit wraps you in a trace of that too. It sparkles like a gemstone. Your clothing discloses a tiny glimpse of the heavenly throne.

When I daven this paragraph, say the words and kiss the blue thread of my tzitzit, I try to lose myself beneath my tallit, feeling that I am wearing the ocean. My tallit drapes me in the infinite sky. It helps me touch the Throne of Glory.